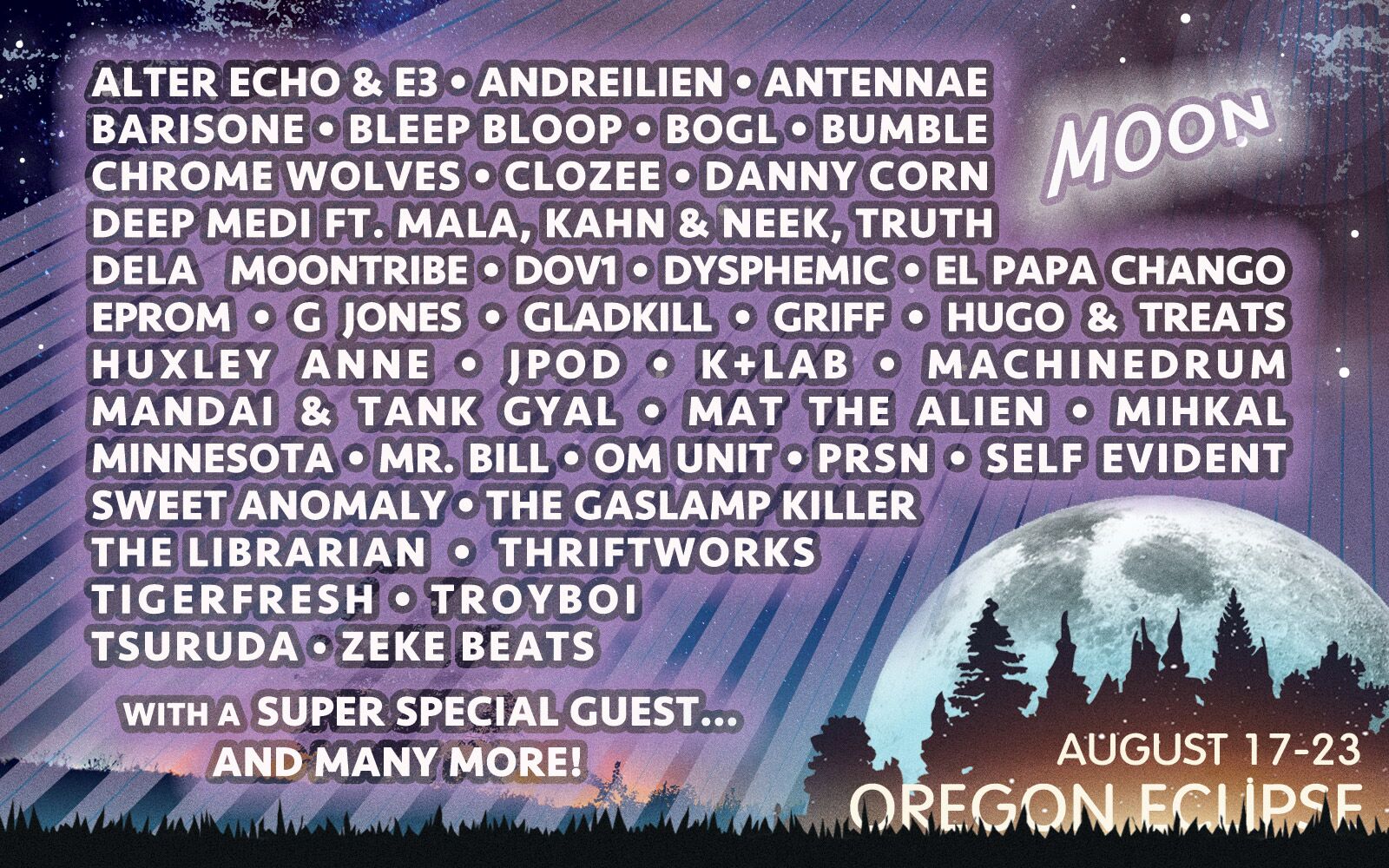 Just as the sun rises, so too does Oregon Eclipse near. With 7 stages each boasting a lineup worthy of an entire festival, we’ve decided it wise to feature our top picks by stage. Some we love. Some we just discovered. All essential.
Click here for more from this series.
50 Days

Second up in our teaser series: The MOOOON. This stage features enough glitch and bass to make us question if we really are cogs in the matrix. Come August, we’ll definitely be a part of a whole under the wobbly Moon.

To experience Machinedrum is to experience a masterfully crafted foray into jungle, beat, glitch, footwork, and drum & bass all at once. Travis Stewart has spent the better part of 20 years playing around all sides of the industry and his sound certainly shows it.

Berkeley’s Jake Atlas, or Thriftworks, is one of the most industrious producers in the downtempo dubstep and glitch scene. Since 2010, he’s put out 14 LPs and EPs totalling over 150 tracks. And that’s just stuff released. His sets are uniquely paced and well worth the time.

The worldly elements that French native CloZee adds to her glitch foundation helps create a unique soundscape: a blend of organic nomadic sounds and the hiccupyy roughness of electronica. Together it creates a tonality by which to easily get lost in.

Having been born directly into music, Tsuruda has developed a deep understanding of theory. He ventures into experimental beats and bass to create an amalgamation of sound that is purposefully discordant yet jazzy and romantic.

Eprom really needs no introduction. He’s had a steady rise through the music ranks since 2007. His bassy sound has evolved alongside him, never losing its frenetic nature, but rather always growing in the complexity and depths of glitch and drum & bass.

Rising LA star Huxley Anne has been spending much of her 2017 in the LA beat scene mastering her own unique style of moody, scratchy beats. The eeriness of it has a mysterious appeal that’s best seen live.

A dash of funk on top of layers of Drum & Bass and the makings of K+Lab are clearly evident. You can be sure his set will be a dance party will all the right amounts of whimsy.