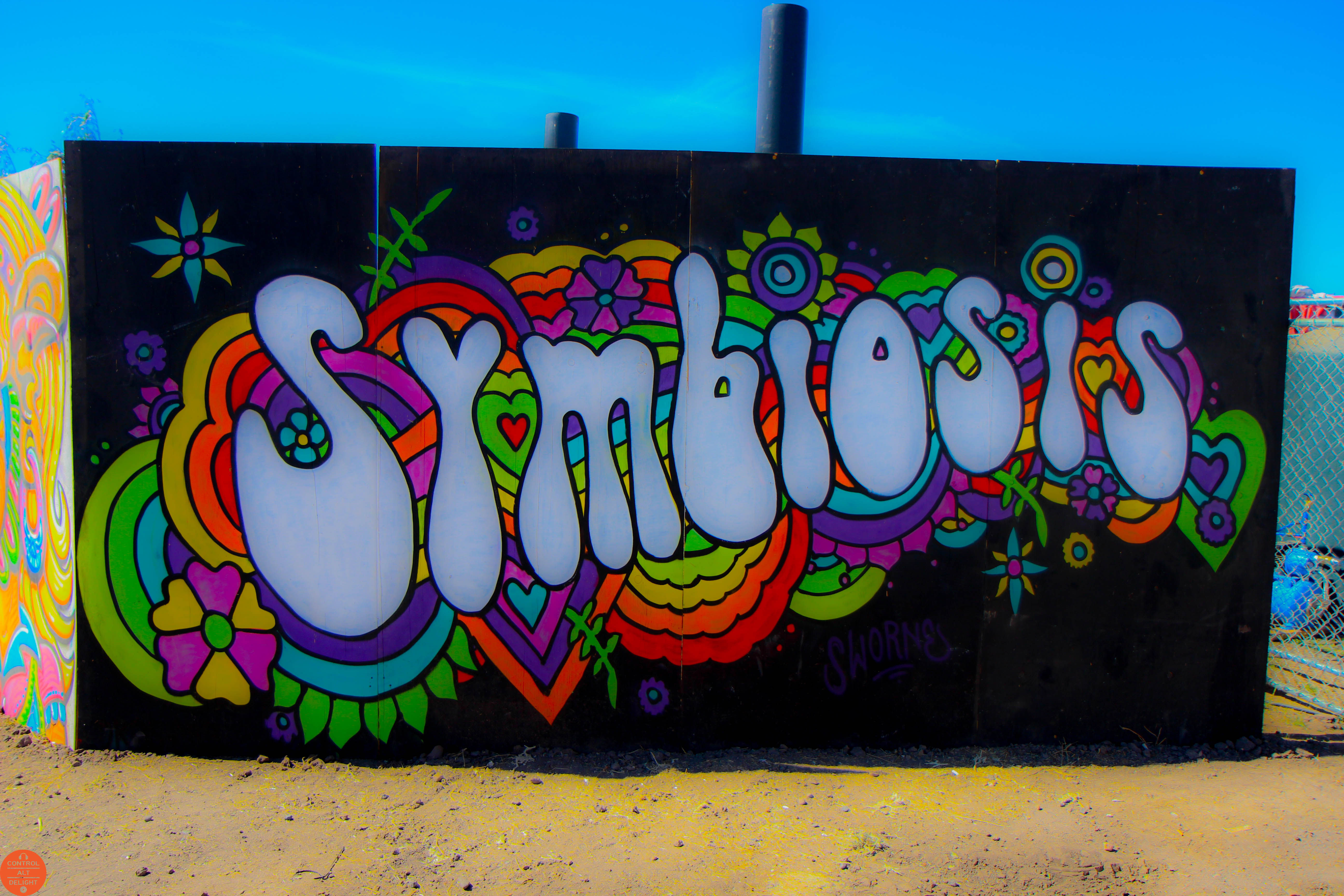 After it’s 11th installment, Symbiosis has cemented itself as one of the best music and art gatherings in the US. The hosts have perfected the art that goes into harboring the knowledge, wonder, and magic of what experimental pop-up communities have to offer. And, as always, the music and art are top notch no matter where a wandering heart may find itself. We were somewhat skeptical of how the increased attendance – 15,000 tickets sold – would mar the experience we had last year; loss of intimacy and the trouble that comes with it (crowds, crime, and irresponsibility) weighs heavy on the luster. Upon arrival, we found the pre-fest jitters to be just that: butterflies fluttering for a home to settle. And we were home. 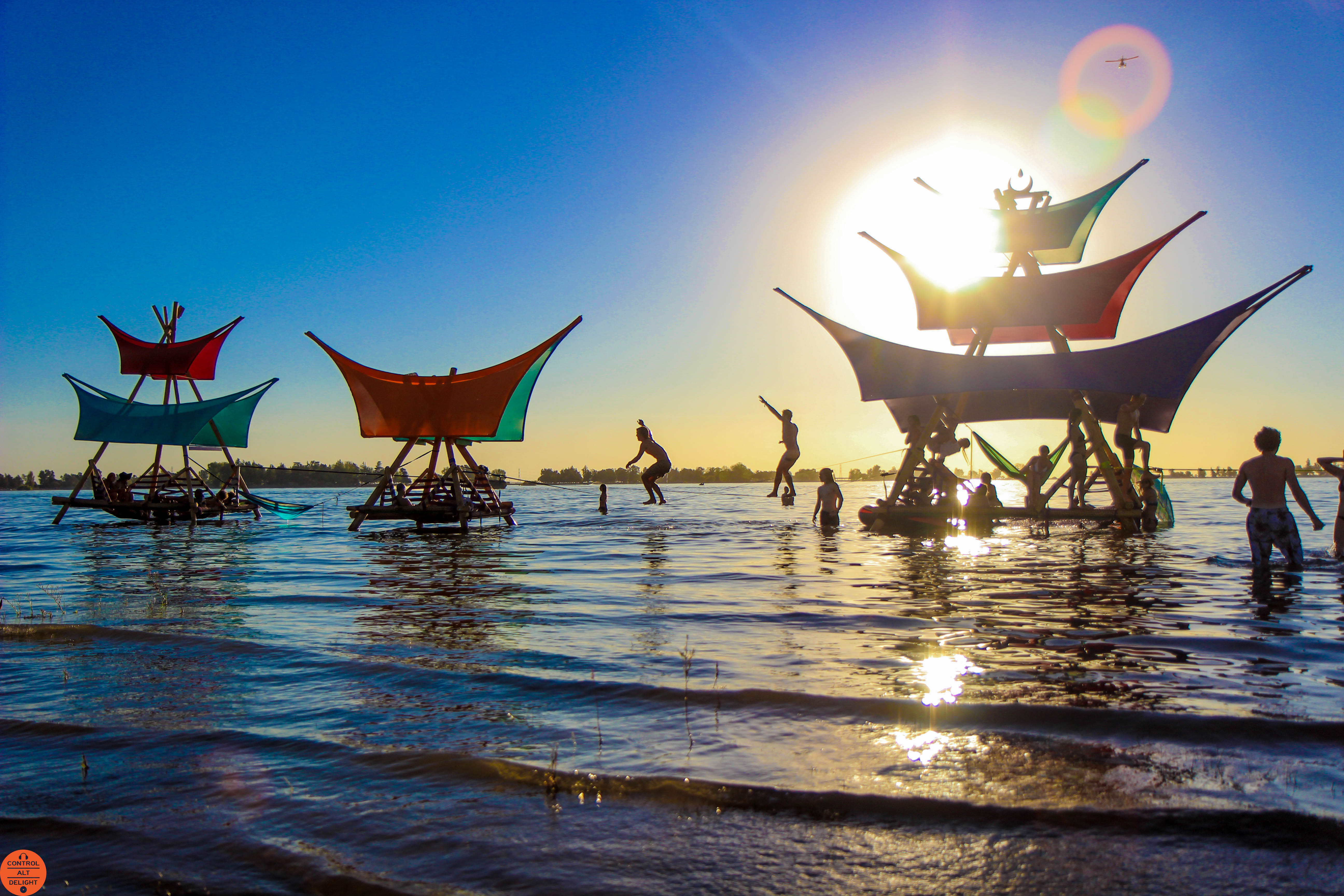 Unfortunately, but as expected, we met the festival’s glowing multicolored ribbon arches by inching through a baptism of dust. The hassle spent slowly trudging along was quelled by good company and everyone else suffering through it together (that’s what family is for, right?). Everything settled into a nice groove once we cleared the Rainbow Connection. We found it curious that organizers would schedule some of the best acts on the first night (An-ten-nae, Bedouin, Birds of Paradise, Sabo, and Oceanvs Orientalis); but wandering the festival with fresh eyes more than met our exploratory needs. The meticulous attention to detail of Symbiosis is unmatched. From the spider web overhang and the eastern bazaar pathways of the Silk Road to the Louisiana backyard boil woodworks of the Juke Lagoon or the extraterrestrial sheen of The Fringe, it was clear that every step of the way would be met with new artistic wonders. And there were plenty; the expanded MOVA peninsula area: wow. 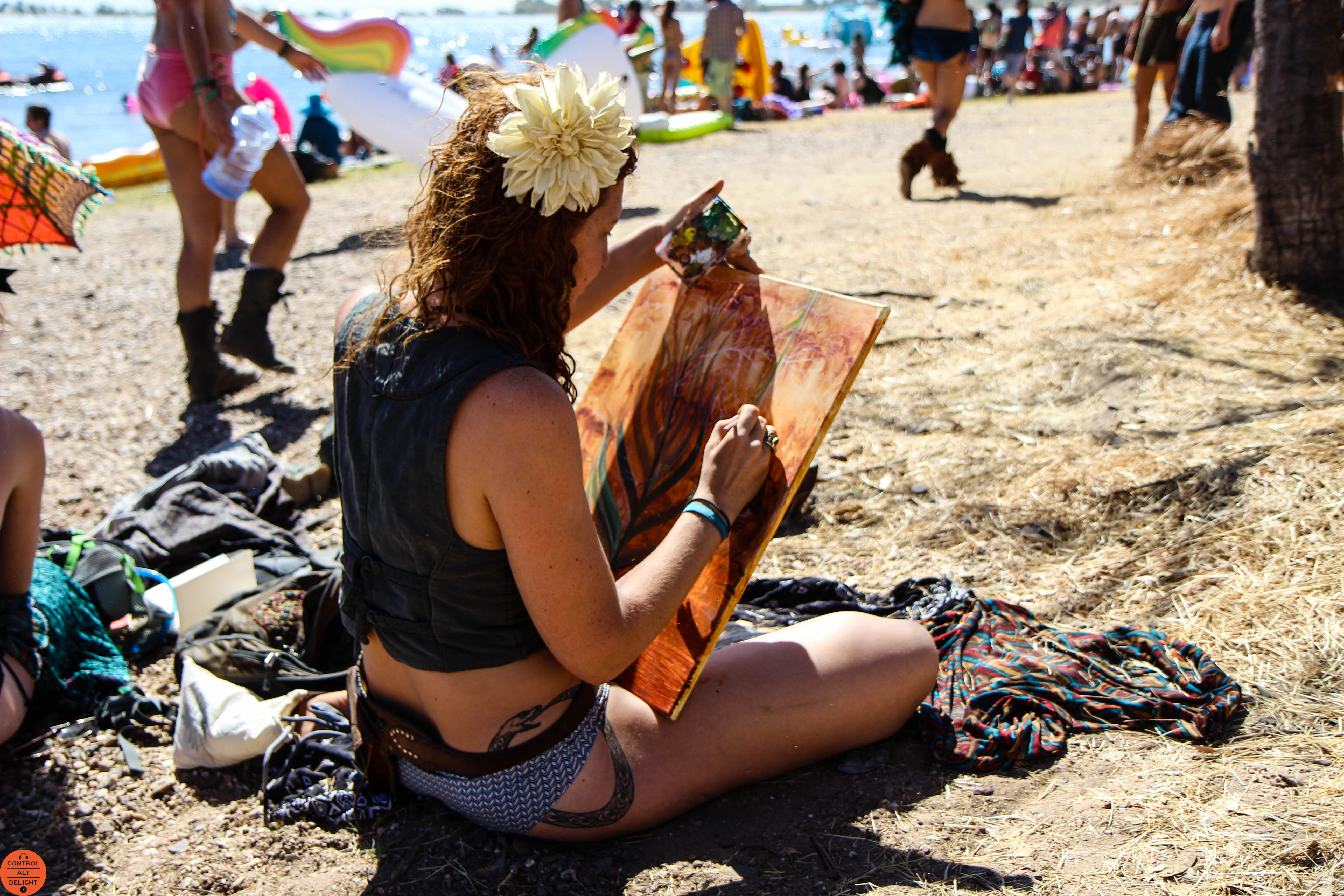 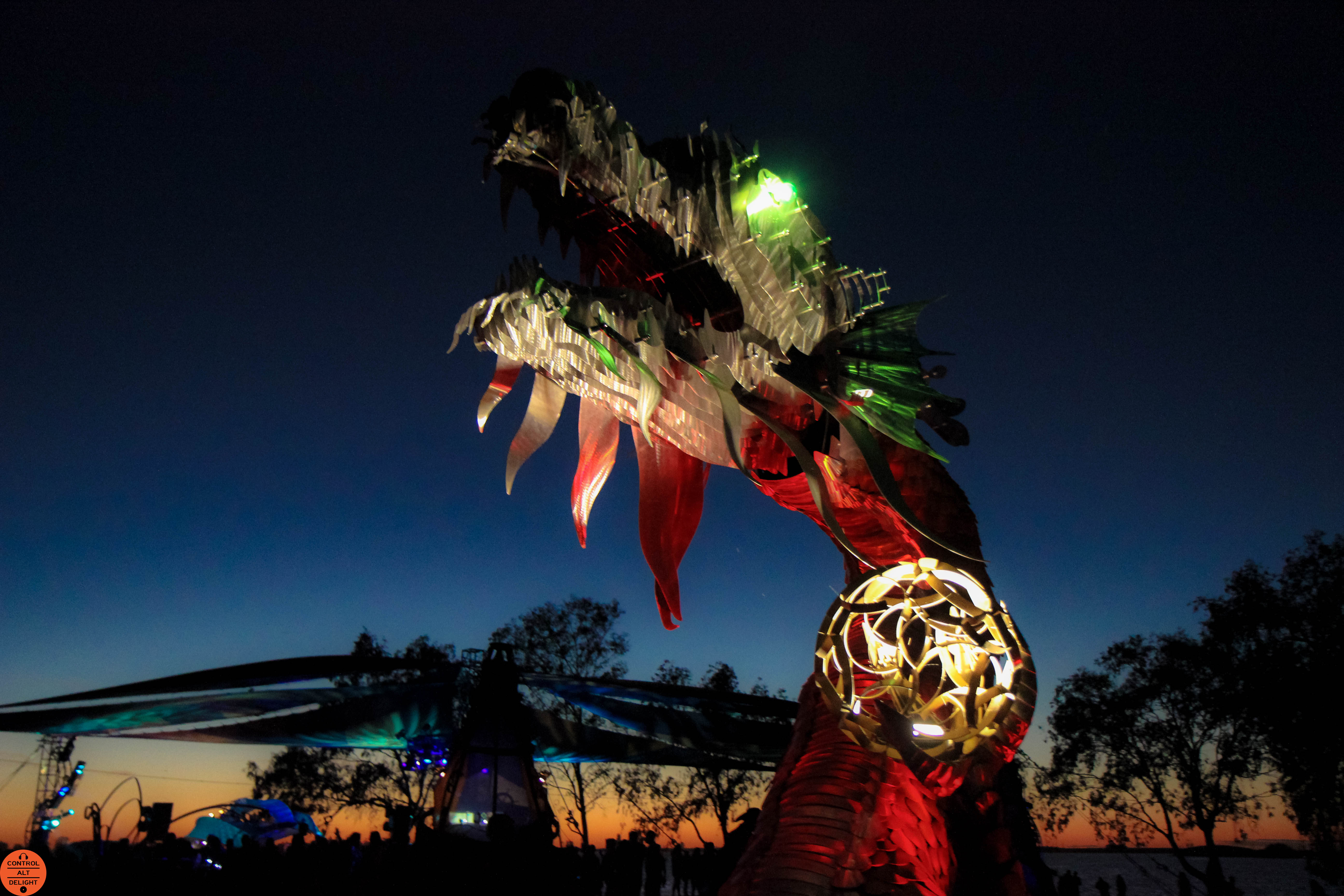 Come Friday, the weather gods blessed us with clear skies and a cool breeze; perfect for some Financial Hacking at the Village and Desert Hearts dust kicking and obstacle bowling at Swimbiosis. The dust cloud that settled over Swimbiosis the entire weekend gave particular note to the festival’s headcount. Luckily, places like The Parlor and The Hub provided us with shady respite to rest our feet and enrich our minds. Speakshops like Penny Livingston’s “Permaculture: Visionary Soul-utions” and Jennifer Dumpert’s “Liminal Dreaming” were considerable standouts for the day. 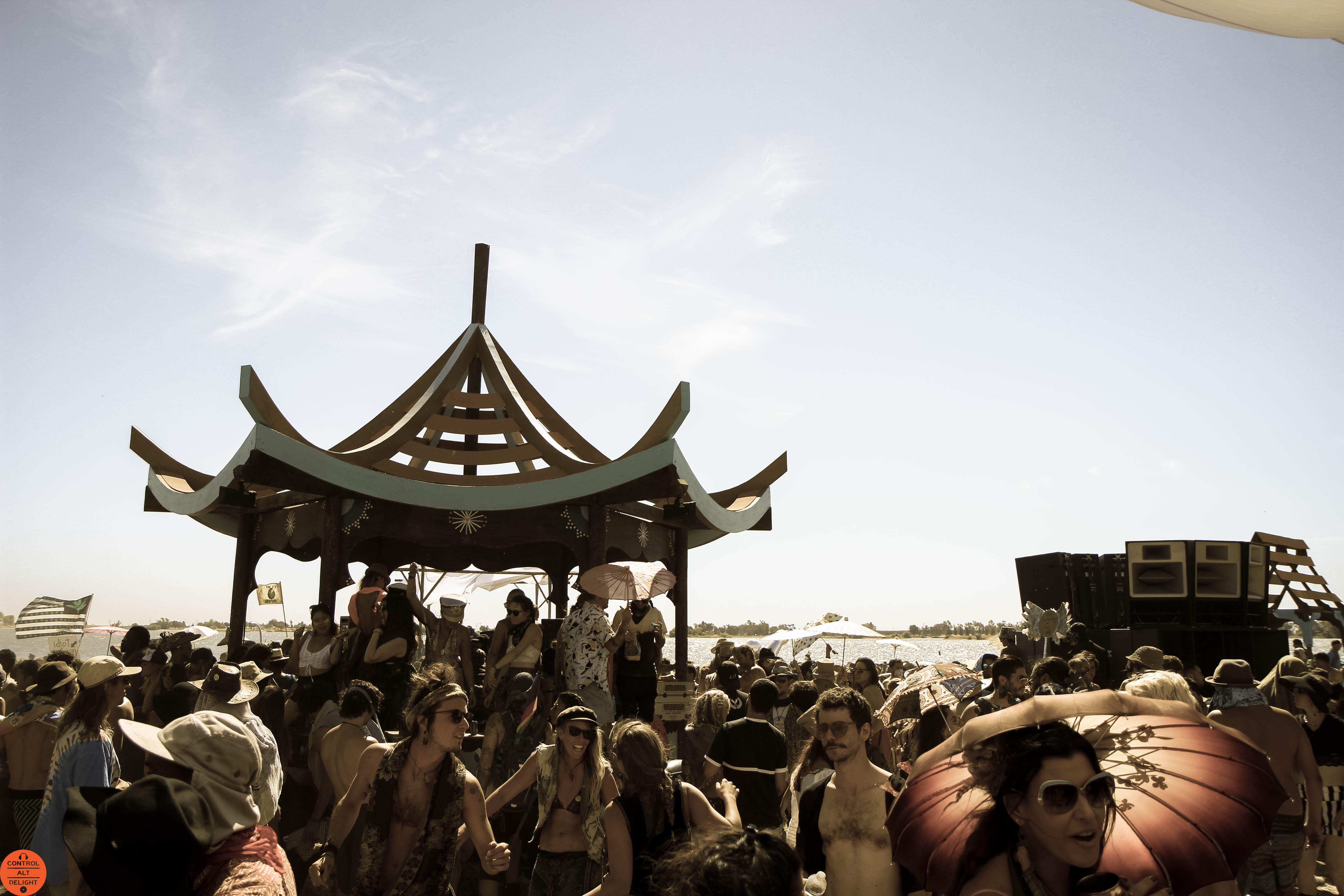 That night, Eitan Reiter‘s dark and driving psytrance, El Papachango‘s hip-hop bass, Nicola Cruz‘s Ecuadorian jungle beat, and the always bass-tastic Dirtybird family (Worthy, Claude VonStroke) let us know that everyone’s weird had come out to play. Nicola earns second best set from us over the weekend for the sheer uniqueness and fun of his Amazonian influences. Our first foray into The Family Circus, a cavernous circus tent in the middle of the whole festival, brought us Perfect Stranger whose steady and driving psy-trance had us pumping through 3am. 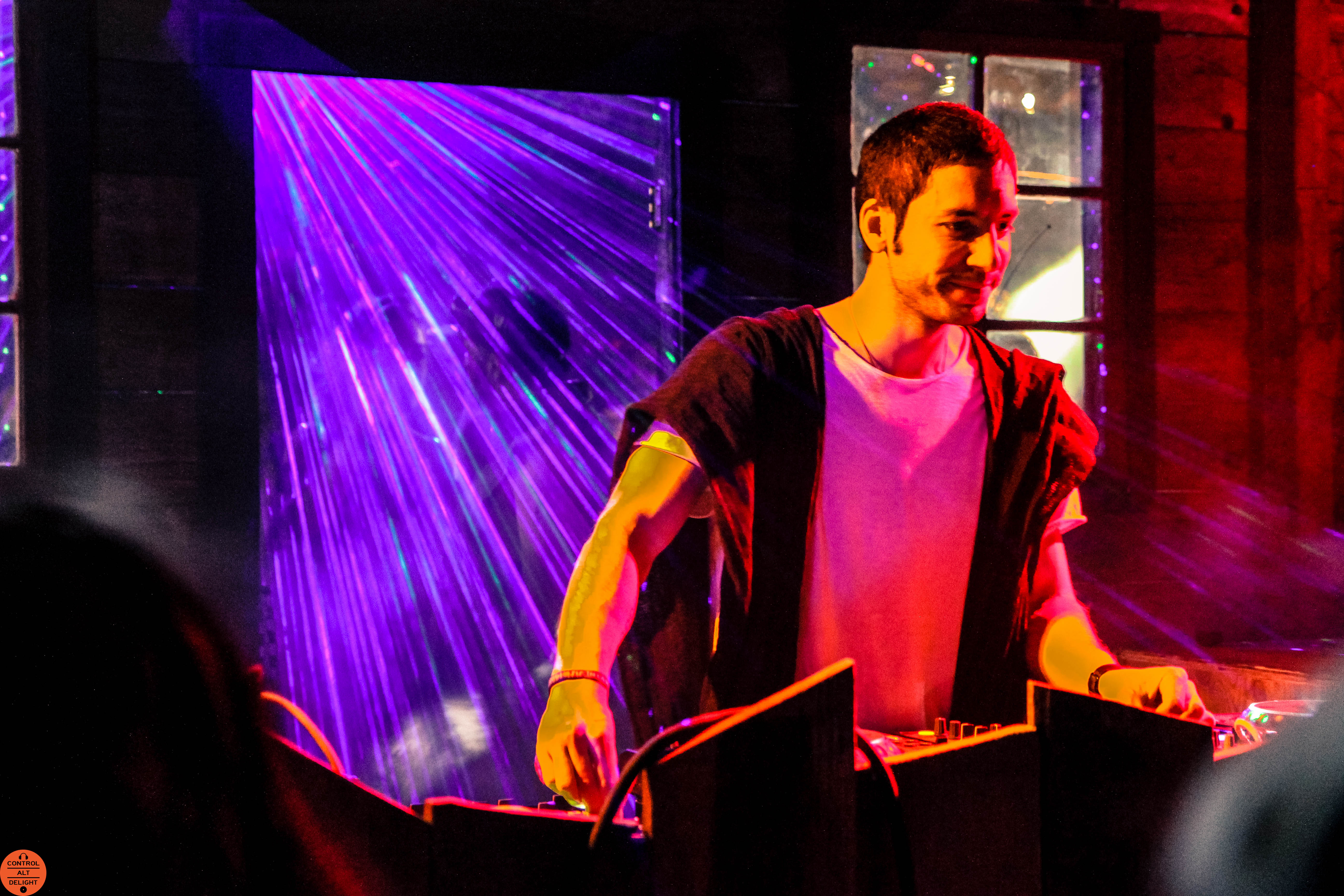 Saturday daytime found us soaking in the relaxation with pieces of knowledge, art, and music scattered throughout (“Sex, Love, and Cacao” is a thing). The day crept by lightly as we prepared ourselves for the 15-hour home that the Juke Lagoon was soon to become. Floating between The Atoll, a lighthouse water stage, and The Fringe for Dirtwire and later chasing art between the MOVA and Sabota at sunset were musical capstones to a wonderfully chill day. One particular moment of passing romance plucked at our heart-strings. Two star-crossed children who had met at Burning Man 2013 reunited over the weekend; major amounts of hand-holding ensued as they wandered the festival in awe and in love. It’s the little, but really rather big, moments like these that truly show what Symbiosis is about – a jovial family affair for people first meeting and friends crossing oceans in the name of love, life, and music. 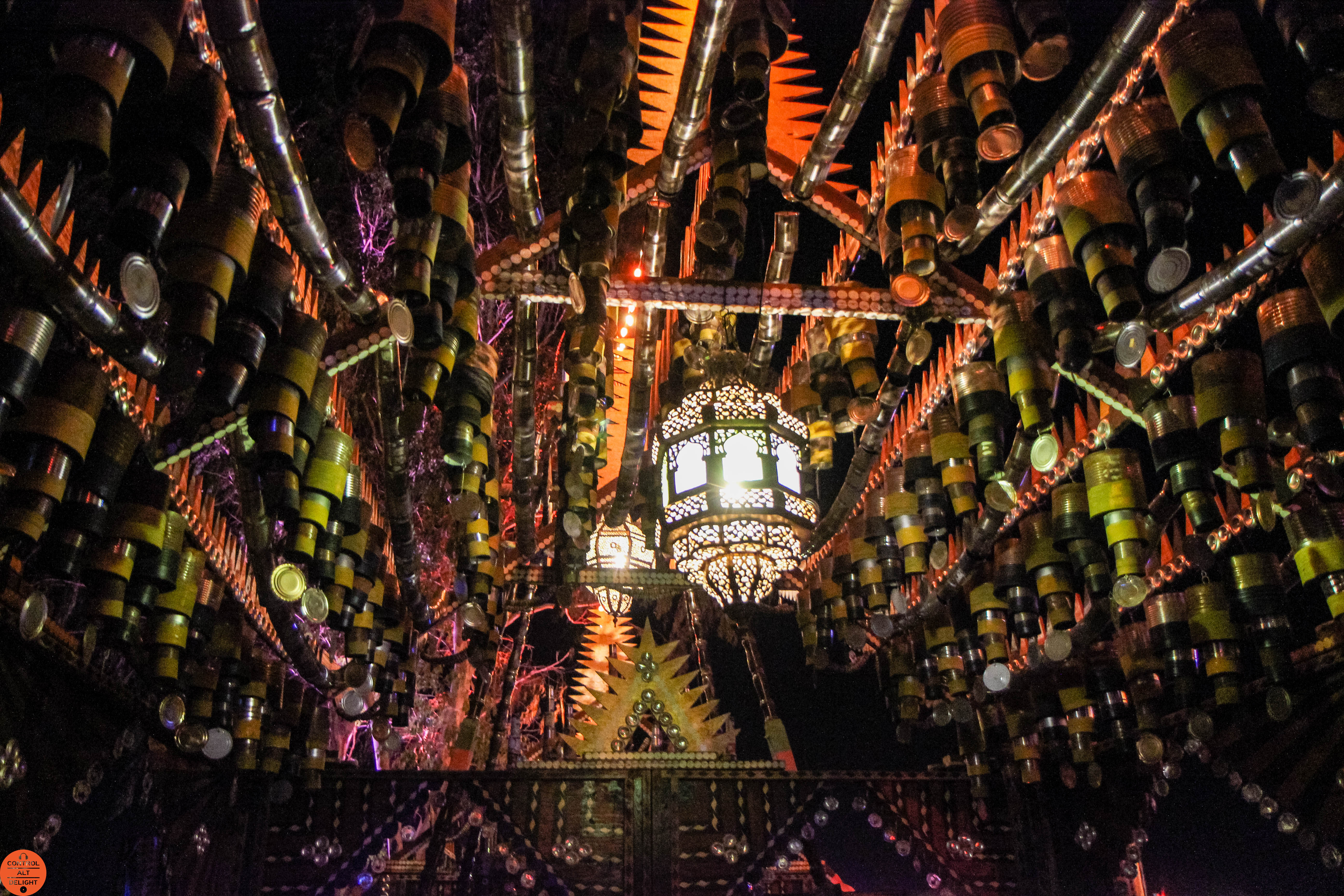 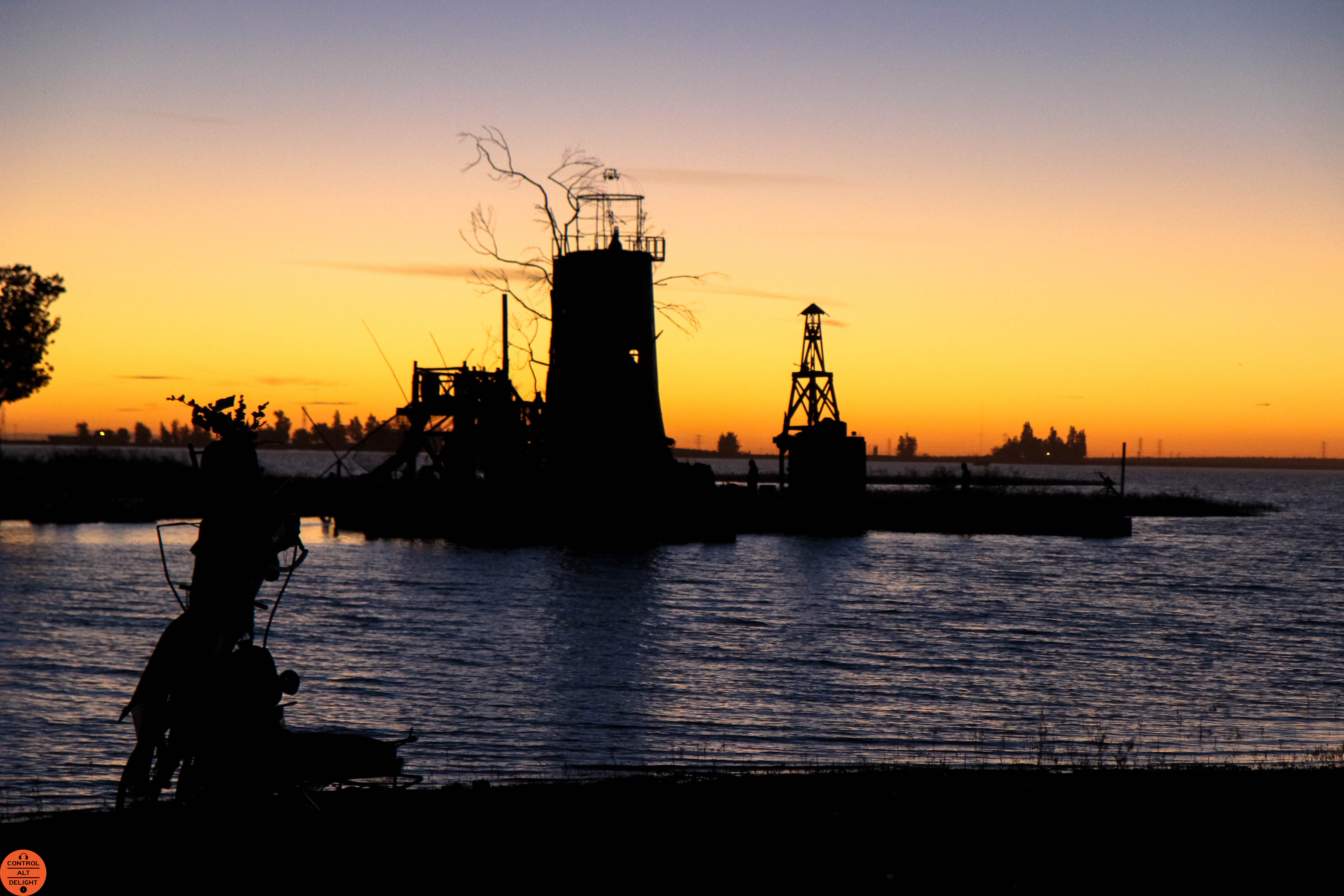 Alas, starting at 9pm, the underground house and techno tornado of Lee Foss, Seth Troxler, Pan-Pot, KMLN, and Nico Stojan carried us through the break of day. By the end of Nico’s Stojan’s 3 hours of mastery of the intricacies of free flowing music, we were thoroughly convinced that nothing would top his set. It’s not often that Seth Troxler comes out to give props to a fellow DJ. Nico’s delicate skirting of desert house, classical piano, hip-hop, Cowboy Americana, and deep techno earned him top marks and a few more die-hard fans. 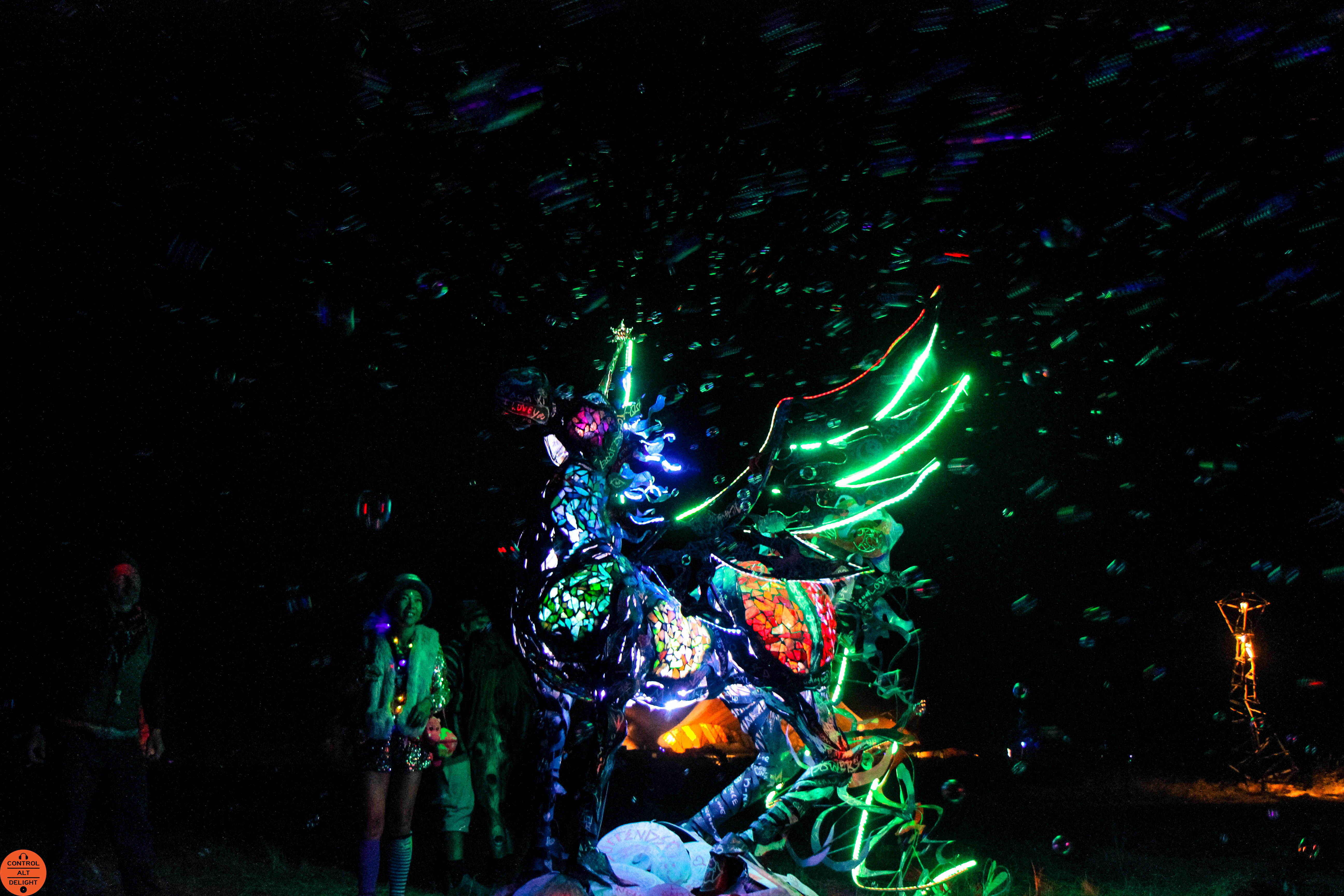 Fighting tired eyes, dust, and a rising temperature (Sunday topped out at 97-F), we spent the rest of Sunday funday slap-bagging about the shore to the distant hum of psy-trance. A fire crafting workshop, “Artivism” with Rising Appalachia’s Leah Song, the “Leadership in Regenerative Living” Panel, and “Networking the Ecosystem” with social enterprises and non-profits rounded out our day of knowledge. It’s pretty safe to say there are a lot of people doing a lot of cool things out there in the world. And they need help – everyone is welcome to contribute. Simply put, Symbiosis provides the avenue not only to expand the mind and have a good time but also to connect leaders in reshaping our world. We’re all for that. 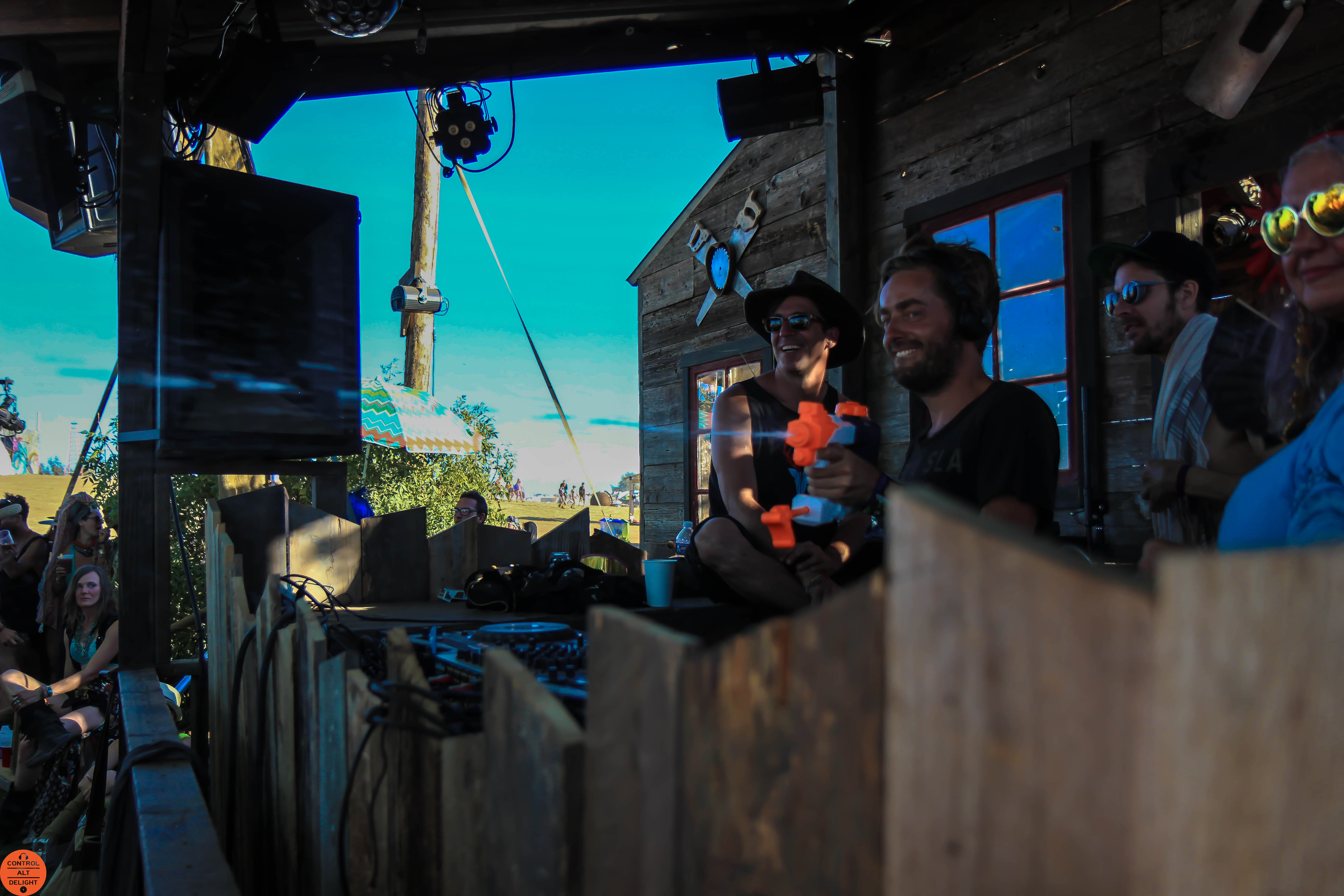 Musically, the day was full of influences from across the spectrum. We caught bits of perfect techno mellow with Adam Freeland, worldly folk mbira jamming with Stellamara, funky sax and key juiciness with FKJ, surfy glitch electronics with Ott & The All-Seeing I, emotional release with Oh Wonder, insane fire dancing with Desert Dwellers, and bassy cloud-floating with Justin Martin. And then the night was done, the car was packed, the dust was everywhere, and we struck out into the night ready to take our inspirations into the vast expanse of just another Monday. 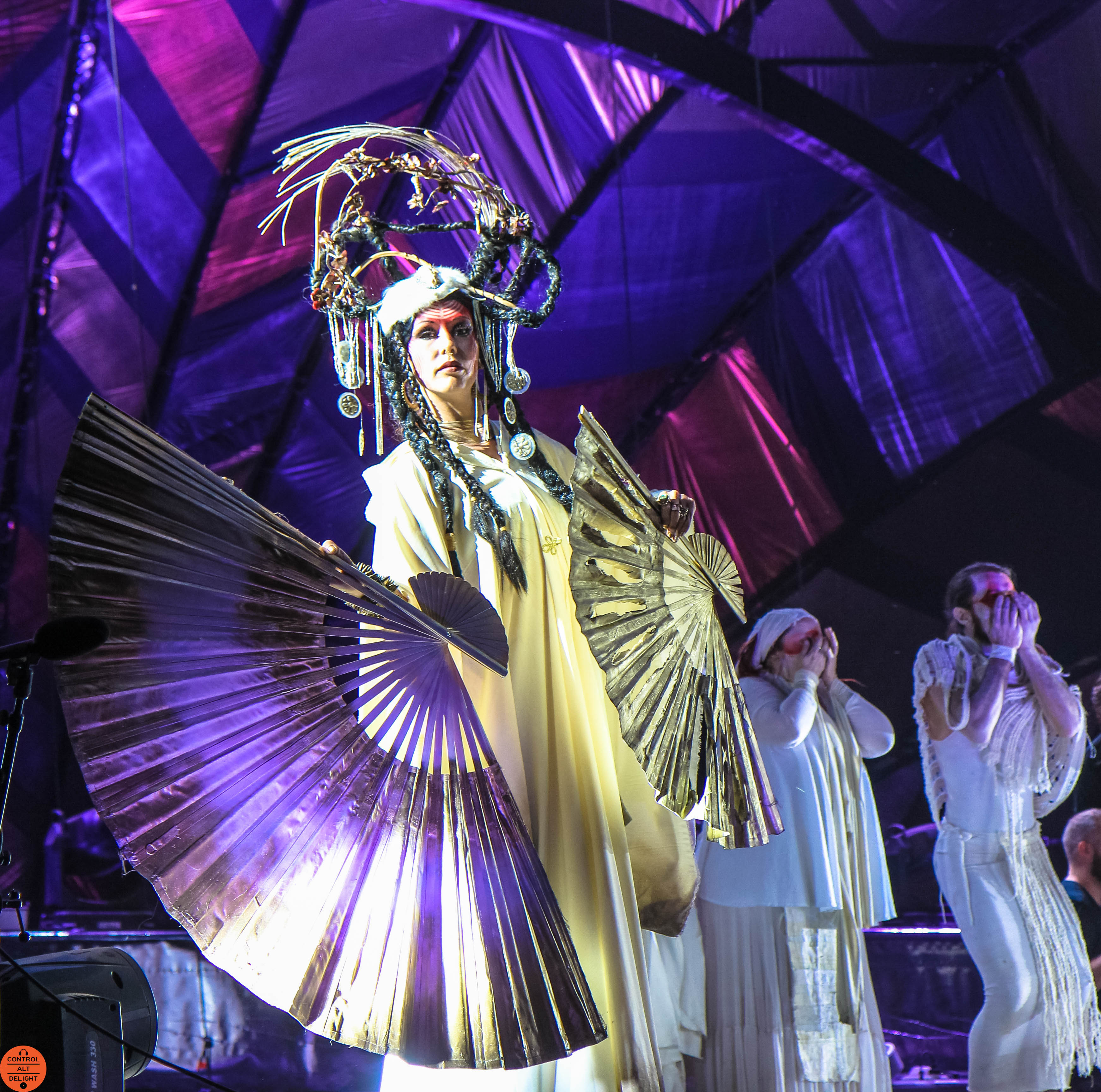 The hope that Symbiosis and gatherings like it instill never really leaves. Opportunities like this to refuel the fire of our youth will always keep us coming back; especially if it advertises the knowledge to positively affect the world and sweet, sweet music. While it is bittersweet that next year’s gathering takes the crew away from the calm of Woodward Reservoir, it is with great excitement and fervor that we will support the team’s next endeavour: Oregon Eclipse 2017. It is good to see the organizers returning to their roots of transience guided by geological and astrological import; it definitely keeps the intimacy. Knowing the care and commitment that went into 2016, we have only the utmost optimism for what grows from the seed that has been planted. Catch us in Oregon come August 17th! 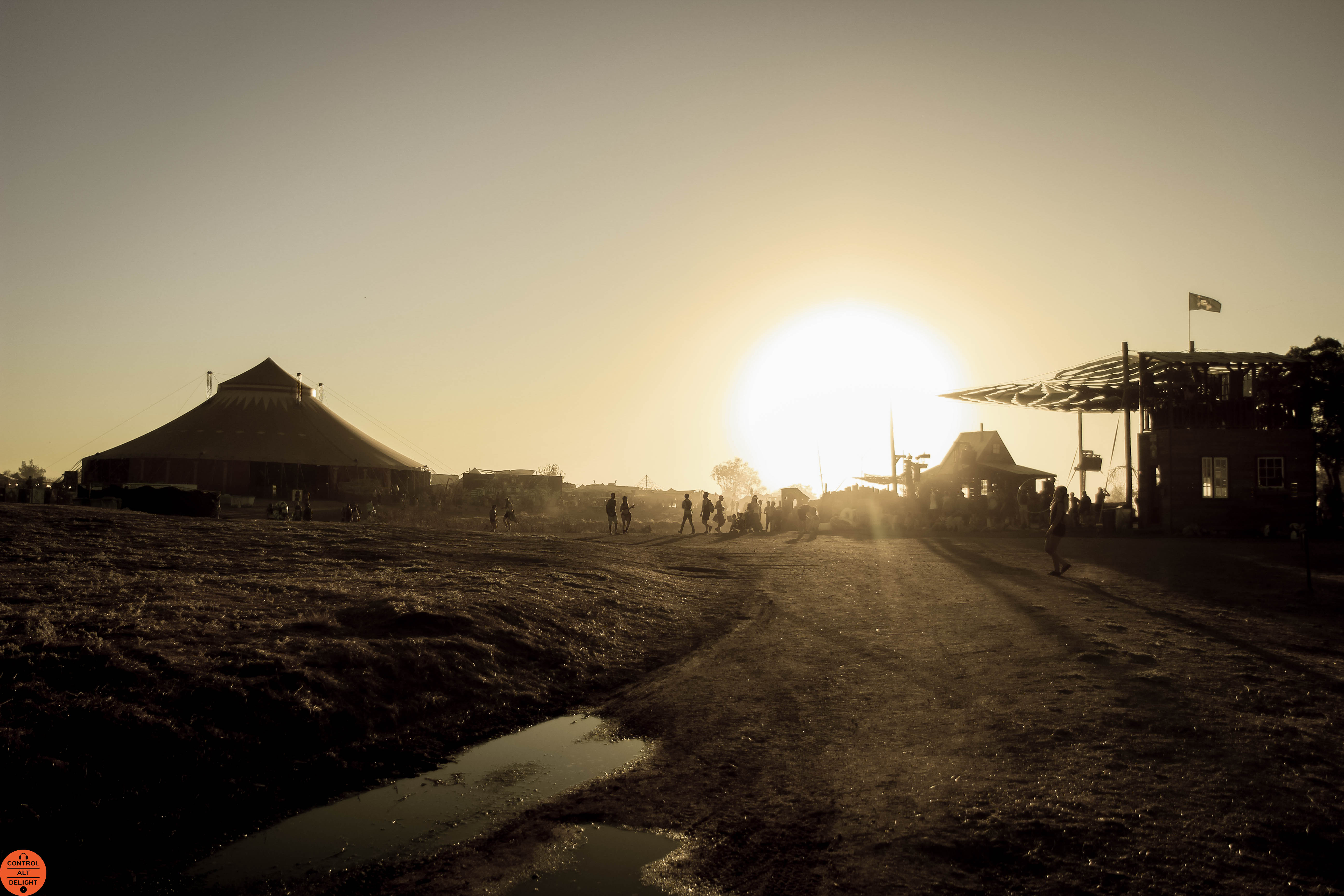