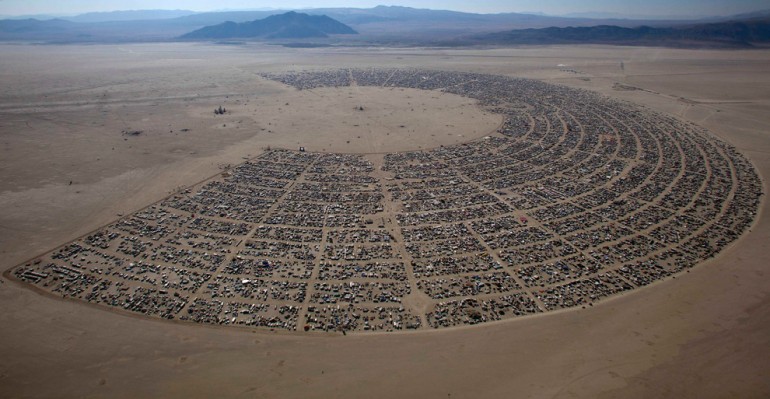 I had heard murmurs of Burning Man becoming a corporate wasteland where past permacultural ideologies have been watered down by the mainstream. In all honestly I could not have been more mooping wrong. More on that word in a minute. I came back from the desert a better, more perceptive human being who just so happens to have white dust seeping out of every orifice.

Let me make one thing clear: there is absolutely nothing like Burning Man. I quickly learned that simply immersing yourself in their culture could initiate growth in a way only Burning Man can. Check after the jump to see why and the highlights from what made this year’s event so special. 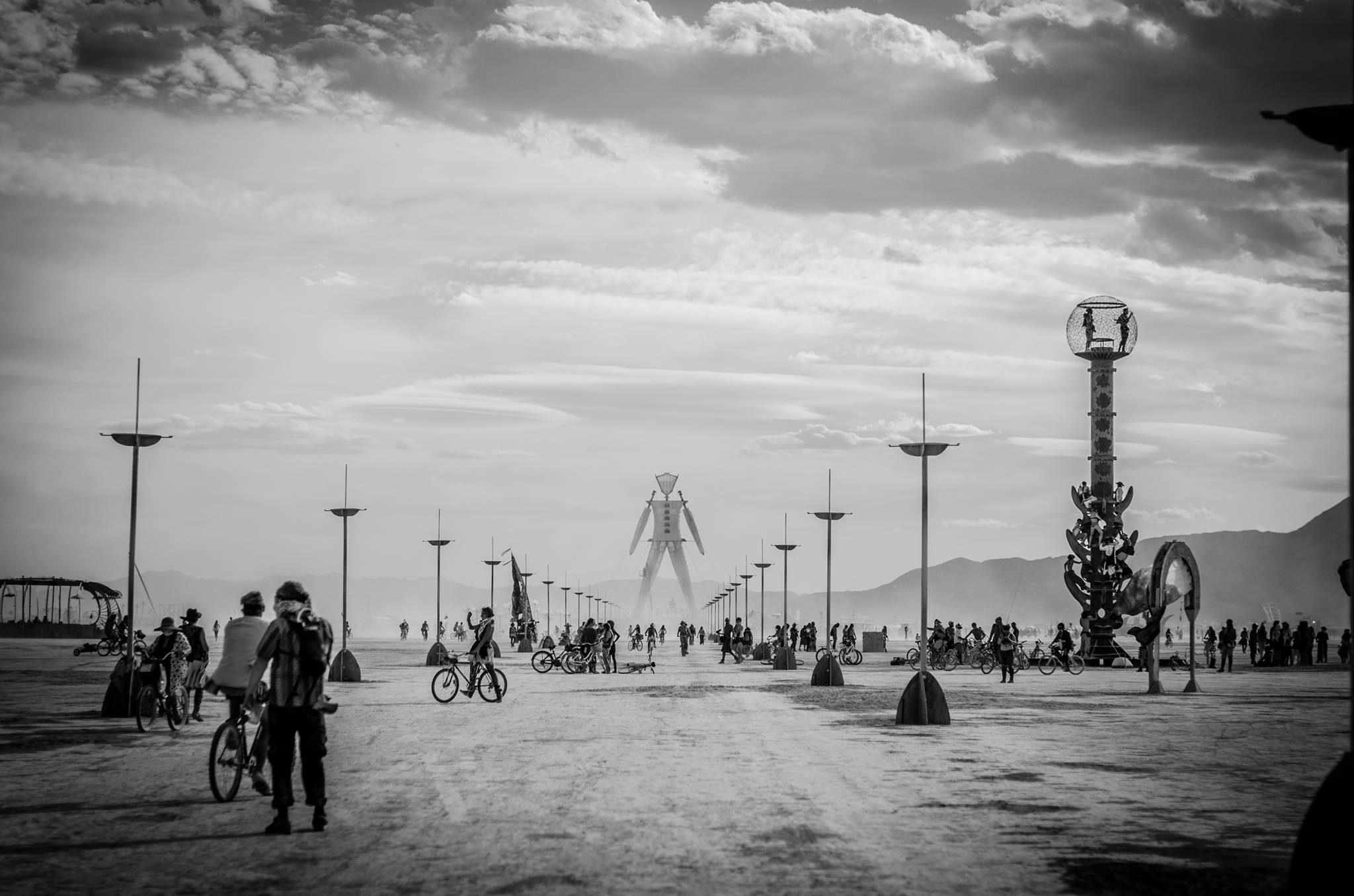 Who goes to Burning Man?

Barristas, stock brokers, Seth Troxler, teachers, male strippers, sushi chefs, accountants, Brenda from spin-class, Diplo, financial planners, Tim from your fantasy league, hippies, techies, yuppies, yuccies, gays, lesbians, restaurateurs, entrepreneurs, Tupac Shakurs, people you wouldn’t let near your kids, people you want your kids to look up to, Susan Sarandon, CEOs, CFOs, CTOs, your aunt’s OB-GYN, those who love electronic music, those who can’t stand it, and people like me: first timers who are just looking for something new.

Everyone goes. Just be open-minded. Have a somewhat dirty sense of humor, and you’re set. 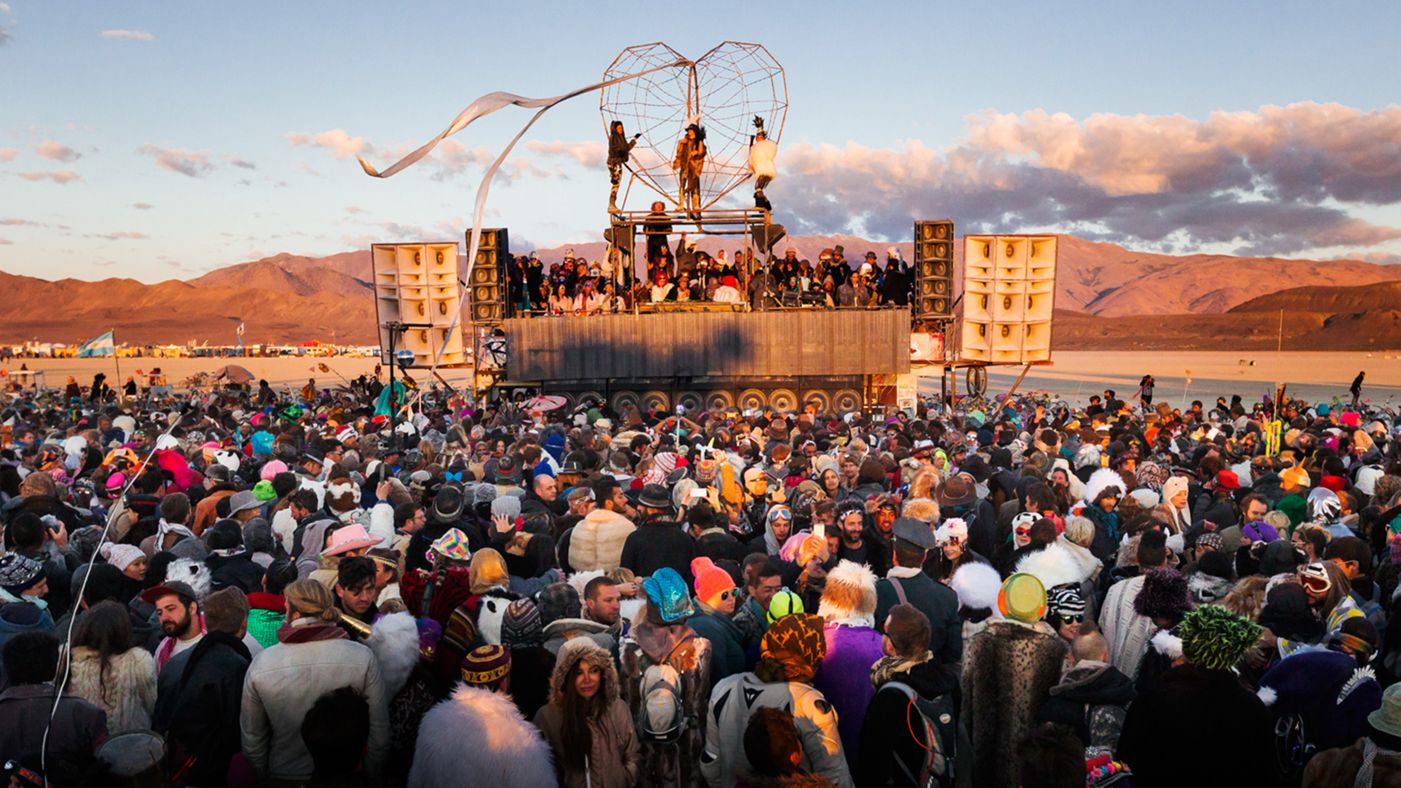 How does it work?

In January, Burning Man releases 4,000 pre-sale tickets. Don’t buy these. They are $800 and get you nothing extra other than the solace of knowing that you don’t have to take your chances in the February Group and Individual sales. February is when the bulk of people line up at the digital box office and attempt to grab the general sale tickets; $390 in 2015. They also have a Low Income Sale with tickets for $190 if you submit an application proving why you need the help.

If you are pre-registered to a camp you can get the group sale, but if not then you have to wait two weeks until the Individual Sale. It really is a lottery and your final chances are the OMG Sale in August for the stragglers and the STEP program where you can buy a ticket from a Burner who can’t attend. Sound confusing? It’s not – but kind of is.

The point is: you have multiple chances to acquire tickets. Which is great, because they sell out faster than any other festival I’ve ever been to. 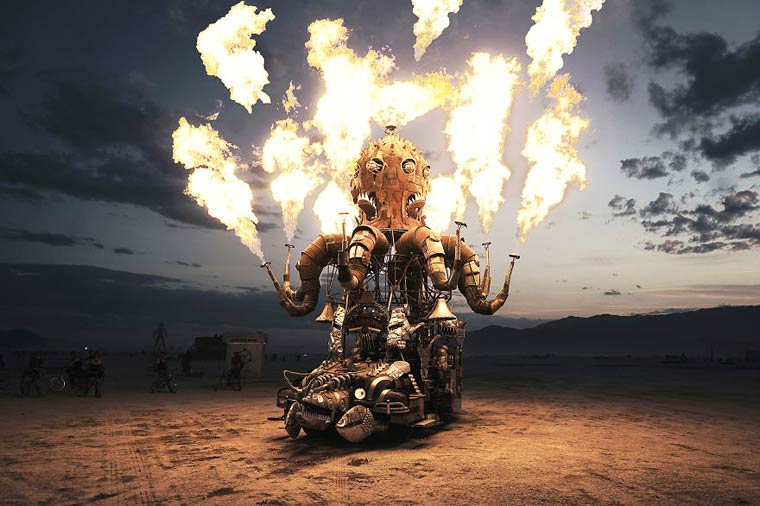 What happens on The Playa?

Imagine a game where you create your own character and go out into a strange, dream-like world filled with quests and gigantic gatherings. Everyone dresses like super-hero versions of themselves and hits The Playa with the ultimate goal of bringing positivity into their short lived new world. Popular styles included: steam-punk, fur coats, goggles (which are a must for the sand storms), clunky boots, embroidered vests, unique tattoos, awkwardly placed piercings, a lot of awesome nudity, and a lot of not-so-awesome nudity.

One of the most intriguing parts of this culture: the barter system. At first I was nervous wondering what I would bring to trade with all the burners, only to find out that the system is not 1-to-1. Everyone participates by giving away food, drinks, and trinkets without any expectation of reciprocation. The implication of attending Burning Man is that you will be contributing something to the rest of the population. It can be anything from a hug, a beer, to a simple compliment. Everyone is in it together, which is what makes this gathering truly special. 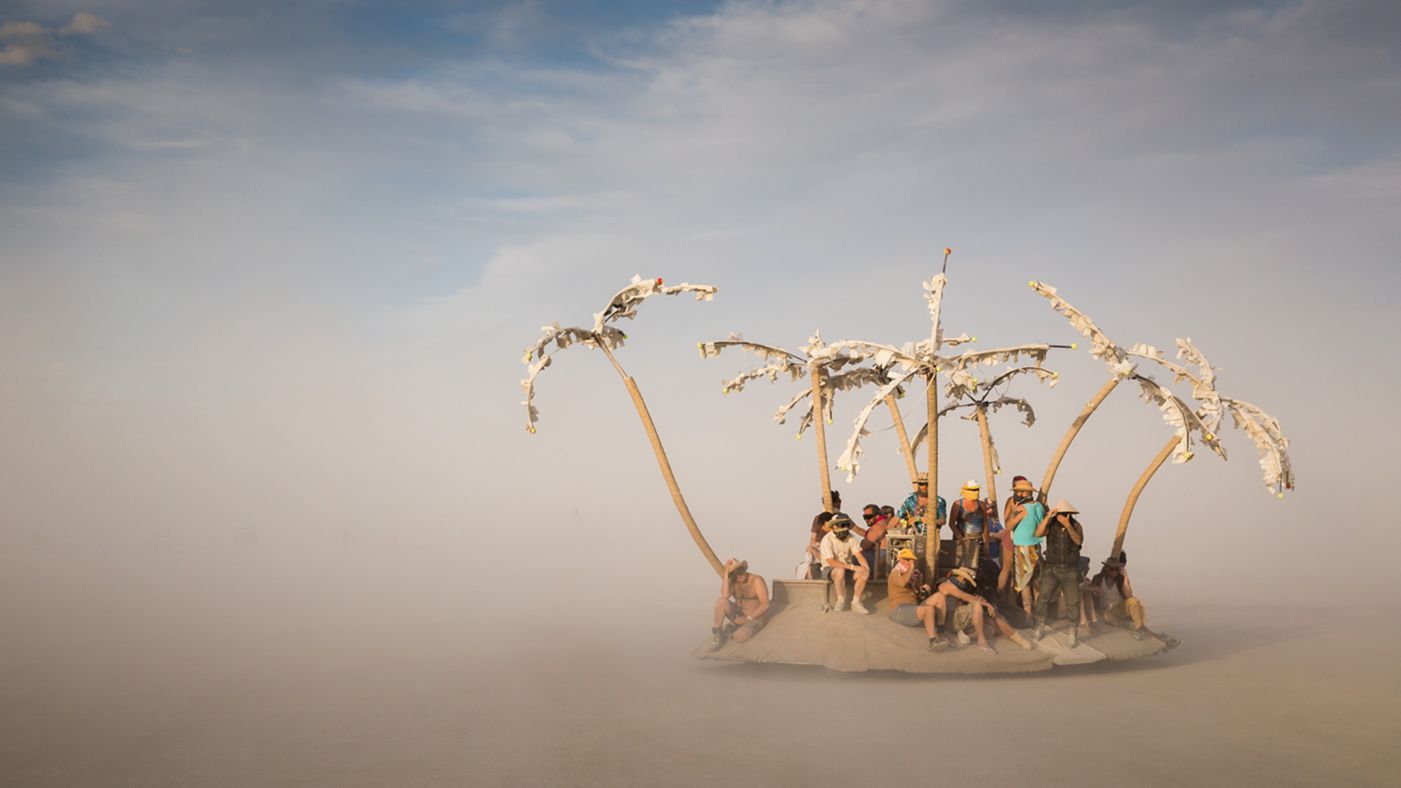 Where does everything happen?

Each year, thousands of people venture to “Black Rock City (BRC);” a pop-up, living, breathing, community-built city just north of Reno. With the main area of camps and gatherings being five square miles, Burning Man is 2/3 the size of San Francisco! This year saw their largest attendance with 70,000 people making up the BRC population. Most gatherings take place out on “The Playa,” the term used to describe the desert terrain in and around Black Rock City.

BRC is set up as a grid-like clock with lettered alphabetical streets and intersecting streets named after the time they would be positioned on a clock. This design allows for you to easily find all of the crazy, weird, dirty, sometimes downright creepy seminars, parties, giveaways, BBQs, DJ sets, massages, acrobat demonstrations, blow job contests, obstacle courses, costume dance-offs, etc. It’s basically Coachella, Halloween, and Tattoine all wrapped into one. 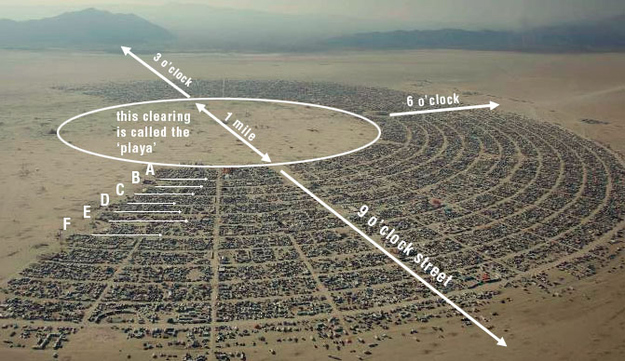 Burning Man takes place every year during the first week of September. “The Burn” happens on the final Saturday of that week where attendees burn all the beautiful artwork they lugged out to BRC from the real world. They burn all of that and “The Man,” a giant human-esque wooden sculpture. Everything is incinerated in effigy to culminate the weeklong event. It’s part of the tradition.

Want to see the art? You got to go to the Burn. Take every social media post with a grain of salt. Seeing is not experiencing. Get out and see. 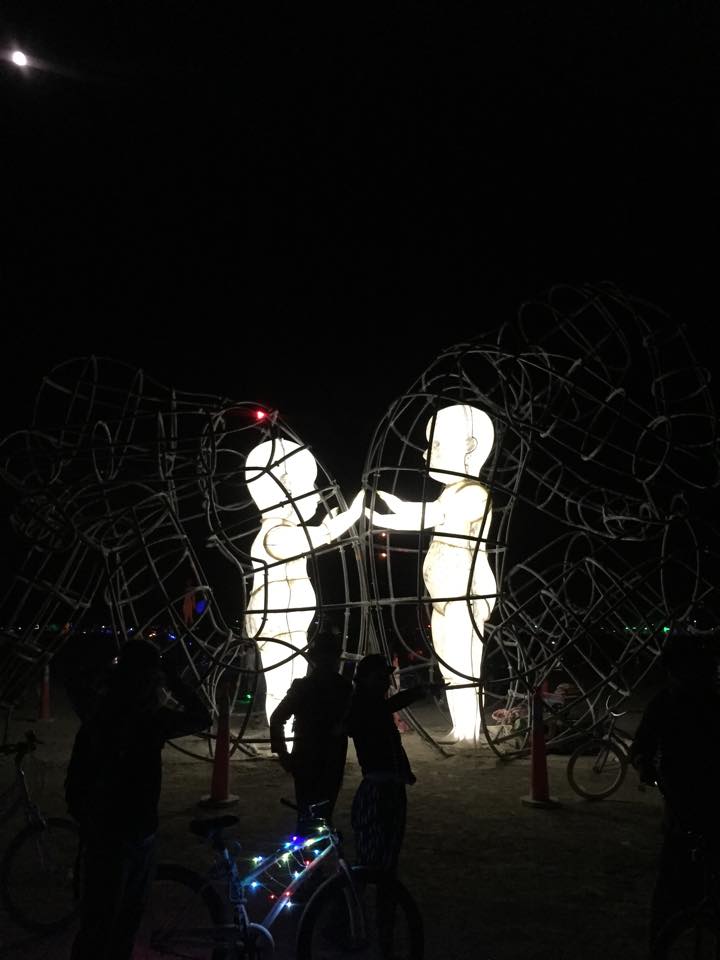 I asked myself the same question. Why am I here? I hate camping. I hate sweating profusely. I for the most part can’t stand hippies. I’m a mere city slicker with a bandana wrapped around my head. Once you get inside and feel the positivity in everything around you. It’s surreal. It’s the exact opposite of going to a rave where the air feels more like cigarettes and gonorrhea. For the entirety of their stay, all Burners just want to embody good and spread optimism. And remove moop (remember that word? It means matter-out-of-place); the pack-it-in pack-it-out philosophy stands much stronger here and spreads deeper than anywhere else I’ve experienced.

I consider myself to be a marginally spiritual person. This was one of the major common threads I felt with a lot of the people I met there. I spent a decent amount of my stay in BRC meditating and talking about meditation with other people. Burning Man allows you to access every aspect of your psyche with like-minded individuals. 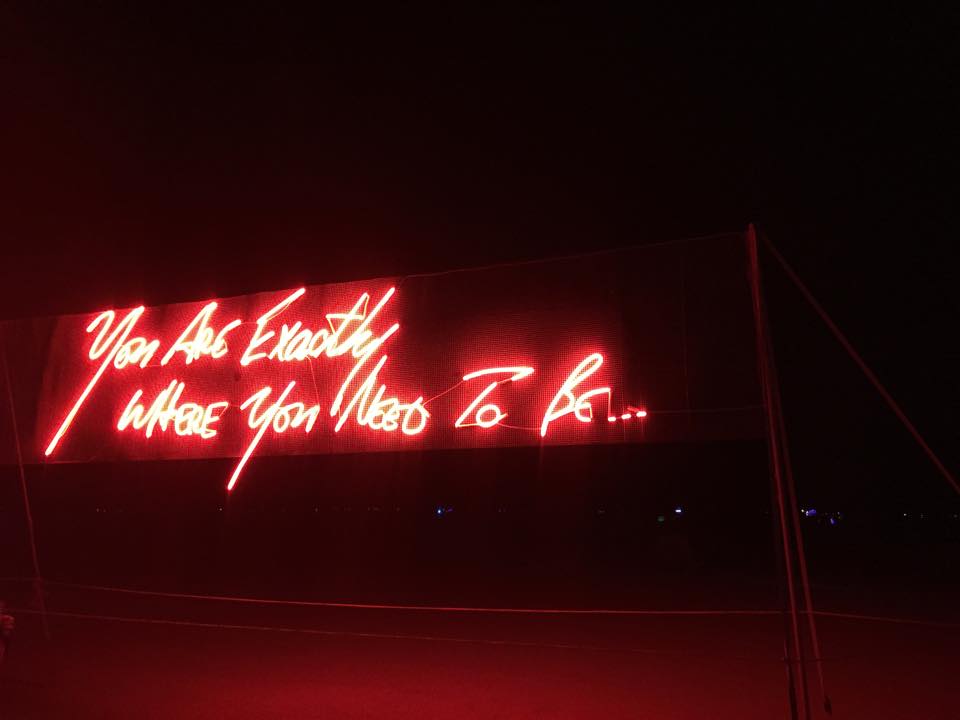 Burning Man is the ultimate expression of humanism. It is the culmination of the notion to create a utopian society; free of economic and structural barriers we face everyday in the “real world.” It is a center of liberation and mental-centeredness that is worth experiencing for everyone. It is this very culture that will keep me going for years to come. 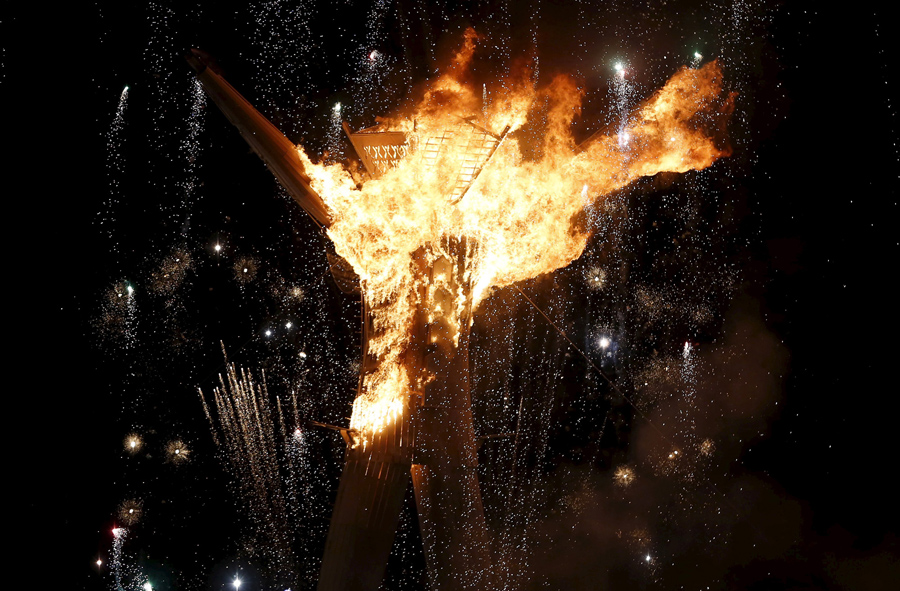